So Internet, it happened.

I’ve just brought Rascal home from his surgery, and he’s out cold in his kennel with a white silk sheet over the bed to help keep him cool. So it’s time to talk about the day’s experiences and possibly post his very first post-op photos.

The surgeon said it went well, and monitored him for about four-five hours before releasing him to us this evening. His scapula has been left in because of his age and gait said the surgeon, I didn’t realize it was an option! He’s received two pain shots which has him flying very high. He sort of just dropped to sleep where I set him in his kennel. And I’ve been sent home with three oral prescriptions. Since he had his surgery today, he cannot have any food through tonight and only limited amounts of water. Just enough to whet his whistle! I honestly wonder if he’ll wake up before bedtime.

It’s definitely been a bit of a shock to see him with an incision where his leg was, but I must say looking at loads of pictures of dogs fresh from the same procedure has definitely helped me get over that shock enough to carry him home. My arms are so tired though! He’s a heavy boy and was dead-weight laying in my arms the entire drive home, the brief pit stop to see if he’d pee in the grass (he didn’t), and up into his soft bed.

I’ve got the living room set up so that I can sleep beside his kennel tonight and keep a very close watch, I’ve also prepared a movie marathon should it become a late night. The vet warned me there’s likely to be some pain tonight since it’s very much Day 0.

I think there should be a lot of questions I need to be asking, but my mind is wonderfully blank right now. I’m just so relieved my old man made it safely through another heavy dose of anesthesia. He’s resting comfortably for now so I’m going to count my blessings and enjoy this moment spent beside him.

I never realized how wrinkly his loose skin looked before now, the folds are out in the open with his hair shorn away!

I feel like showing off how well he looks with his S curved incision site, so if the fresh post-op photos aren’t for you; this post is done!

He was still attempting to hold his head up when this was taken, the fight was lost 0.2 seconds later when he dozed off fully. I can hear him snoring gently as I type.

So, by now you’ve met this guy:

Today feels like the right day to talk about this dude’s life so far, because it’s been a great one. Back when I was a kid, I was obsessed with a particular kids’ program on tv.

This naturally led me to hounding my parents relentlessly for a Wishbone of my own. My older brother had talked them into his own puppy two years earlier, and it was my turn! At that time we owned not only my brother’s 2 year old black lab mix, but also my mom’s older guy whom we thought was a st. bernard for ages before accepting we really weren’t sure.

These were the two dogs we had, and they’re the pack that Rascal spent his younger years with. He loved them, they loved him. I think they both played large roles in how Rascal developed, they taught him how to dog.

Born chubby I said, but also a redhead once upon a time! I love this picture because it’s possibly one of the only remaining “baby” pictures I have left after a computer crash.

I ended up succeeding in my single minded pursuit of a jack russell terrier, and when I was nine years old I began reading newspaper ads, checking the internet, waiting for anything to come up about the breed I so desperately wanted. Low and behold a few months later I find some terrible news, a local pet shop is discounting a puppy because if he doesn’t sell within the week, he’ll be euthanized for being “too old” to remain in the shop. I remember thinking Rascal was sort of awkward and not so cute the very first time I saw him in one of those awful pet shop cages, but to hell with letting him die! So we then talked the cashier down another fifty bucks and for the first time in our lives, paid for a puppy.

He was named Rascal on the ride home, when we had no other good ideas and he pooped on the back seat with no remorse.

In the thirteen years since Rascal has joined my family both Zac and Kira have passed away from old age, Kira’s been gone for 2 years now, Zac for over 10. Some years after Zac went we rescued Rascal’s wife, the lovely black terrier Ebbie. We’re not sure what she is exactly, just that she was there on mom’s 50th birthday, cute and in a bad situation. So we brought her home!

What we didn’t know was in Ebbie’s future, was an accidental pregnancy when she went unsupervised with a family friend’s male dog. Whoops! (All pets of this household are spayed/neutered now!) This is how another dog ended up joining our pack, we found good homes for all her puppies except one, who my mom couldn’t resist keeping. Rascal’s step-kid, Kokoro. Ebbie and Roro aren’t my dogs, to be clear about it. They’re both my mom’s dogs and she spoils them rotten. But they’re both a part of Rascal’s life, which is the point of this post. He and Ebbie share dog beds, cuddle and are generally an adorable dog couple. We’ve always found it funny that Roro’s parents were both black terriers, but she came out sort of blond/ginger as if her mother was thinking of Rascal instead.

Both Ebbie and Roro submit to Rascal as alpha, he’s bigger, older, and more experienced in the ways of our farm. They’re our trio of attitude. But they’re not all either. Not by a long shot. I said earlier in this post that Kira has been an angel for coming up on 2 years. Kira was a great dog, and she led the pack after Zac; was Rascal’s hero, best friend and teacher. Our family was truly devastated by her loss, it’d been a long time since Zac had gone and we weren’t ready to lose her.

It was sudden and natural, no chance to even rush her to the vet. Fine at the beginning of the evening, gone by midnight. My dad is a sort of gruff man that is typically more frustrated with how much so many pets can cost than the sort to get emotionally attached, though he’s always dutifully gone broke on vet visits. He was the last one with Kira that night, and it hit him particularly hard in a way he wasn’t at all prepared for. Within two weeks, my 60 year old father was pulling the 6 year old boy, asking for a puppy to help heal his broken heart. Not only was dad heart broken, everyone in the house was, all the way down to the barn cats who usually practice staunch indifference. So within a few weeks of Kira passing over the rainbow bridge, we found ourselves with dad’s choice of puppy. A six week old little girl named Ila

Baby Ila was a balm on the hearts of our pack. Rascal, who had lost his favorite animal companion, was so distracted by having a new baby under his wing that he wrapped up his mourning period and got to work! Ila did the most remarkable thing as well, we still had most of Kira’s things and Ila associated with Kira’s scent. She started sleeping on Kira’s bed, ate her dinner out of Kira’s bowl, and claimed all Kira’s toys. She even picked up on a few of Kira’s odd habits. We concluded these were the signs that Kira had vetted this pup and made sure she ended up on our doorstep. Ila is another mixed breed mutt, though arguably one of the most handsome dogs I’ve ever encountered. Trust dad to pick out a pretty one versus an easy to manage one. She is a high energy, high maintenance dog but I love her all the same. She’s Rascal’s newest protégé and despite growing to four times his size, she still defers to him as the Boss. It’s a pretty funny dynamic that the youngest is also the largest, but the others have learned to put up with her antics in the almost 2 years we’ve had her. While she is my dad’s dog, she tends to sleep with Rascal and I since he and I were the ones to teach and train her.

So there you have it. We’ve traveled through Rascal’s rise to the top of pack hierarchy, and met his dog family. Being the oldest with three fiesty girls around him keeps him playing, and keeps him young. He may be the boss man but he’s never above a good romp with any of them, be it indoors or outside. He still has a wonderful zest for life, and is a wonderful animal. I’ve seen him turn irate, cranky vet techs into smiling animal lovers just by visiting with him a few minutes. People will stop when he’s walking in town just to say hello because he’s got that charisma. This is a dog that is never lonely, a dog that has fun every day, and a dog that’s got everything to live for. If I seem confident that three legs is doable, it’s because this is the dog that can do anything.

Hope you and your pack are thriving, 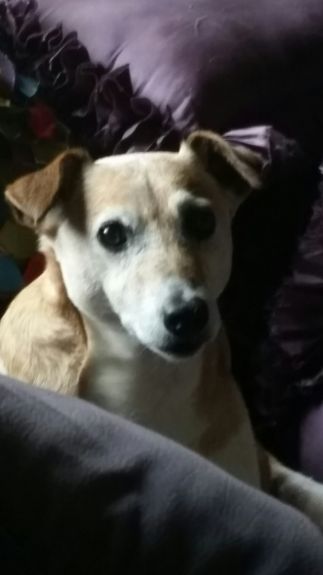 To put it simply, my dog is going to lose a leg.

I’ve decided to create a blog about it instead of clogging up the forums of tripawds.com with photos of my boy as we take this journey together.

As I stated in the forum where I asked my very first questions, it’s been decided that the best course of action from here would be to remove Rascal’s right fore-leg versus continually removing the tumor on his ankle joint. I’ve been keeping myself in a very strict head space since this decision was made, only optimism and faith in the grit of my dog are welcome in this brain. My one wish is that I could sit him down and communicate what is going to happen, it’s the dropping him off for an operation resulting in weeks of pain that will hurt like betrayal. Luckily for me I know Rascal won’t see it that way.

His tumor looks horrible, the skin so tight it’s ready to split, the scar tissue from previous removal operations is actually almost a centimeter wide from the skin stretching so much! Rascal licks at it and I think that’s aided the stretching, but we’ve run out of time and the surgery is scheduled.

Today was a fun day though! Since his human has been feeling the stress and wants to be prepared for his post-op, we participated in a bit of retail therapy today! I took Rascal to two different pet stores to look at a few simple things like a soft but very light t-shirt to heal in, a stand to elevate his food bowl, and some peanut butter pill pockets for the series of pain medications he’ll soon be taking.

I wanted to take a look at the pro-collar inflatable cone alternative as well, despite Rascal handling traditional cones fine. Frustratingly enough both stores didn’t have what I was looking for, either the wrong size or way overpriced! That’s okay though, there’s always online!

Did I mention that my boy loves car rides? 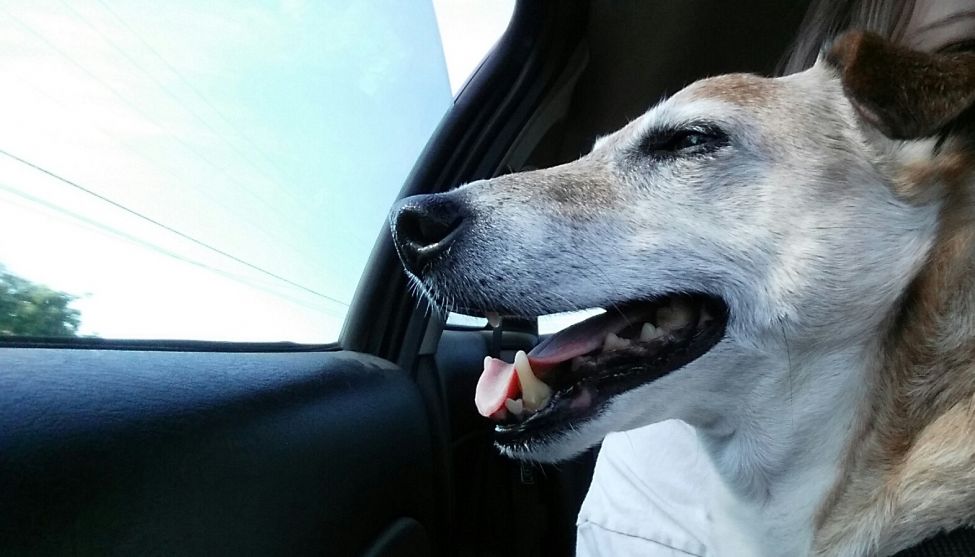 I hope this post finds anyone who reads it well,